[Note: this post contains affiliate links which may pay me a commission should you make a subsequent purchase, thanks for your support!]

The point-and-shoot camera market is basically dead…or is it?  Most people use their phones, which is understandable, but, similar to my iPhone vs Fuji XF-10 comparison last year, maybe there’s a compelling reason to look at the point-and-shoot market again.

There are a few pro-level point-and-shoot cameras out there, but the biggest two are probably the Canon G7X II and the Sony RX100 series of cameras.  While the Canon is excellent, especially at the current $599 price at the time of this posting, the RX100 line is incredibly versatile, powerful, expensive, and admittedly somewhat confusing.

There are currently seven different versions of the Sony RX100, with different feature sets among each.  They all have a roughly 20-megapixel image sensor, most have image stabilization, and can do some pretty insane things.  I’m going to focus on the three RX100 models in this quick overview that I think provide the best value between money and features (if you’d like a complete comparison, PhotographyLife.com has a great comparison graphic):

RX100 III: This edition added a 180-degree tiltable screen for selfies out on the road, as well as a new 24-70mm equivalent lens with an aperture range of f1.8-f2.8.  It’s a great camera for low-light situations and realistically the cheapest RX100 I’d actually recommend right now (the earlier ones are ok but just pretty dated).

RX100 VI: The lens was reworked for the RX100 VI and changed from a 24-70mm equivalent f1.8-2.8 to a 24-200mm f2.8-4.5 lens for some pretty impressive zooming.  This one also records 4K video, shoots 24 frames every second, and has a stacked CMOS sensor.  Additionally, all RX100 models since the fourth edition can shoot super slow motion videos at up to 960 frames per second.

RX100 VII: At long last Sony answered the many calls of its RX100 fans and added an external audio input for shotgun microphones, making the RX100 VII a sudden favorite among vloggers who didn’t like traveling with big mirrorless or DSLR cameras.

A good blogger buddy and friend (Teja from Grabamile) invited me to a Dallas Mavericks game with he and his family, having acquired some awesome seats from a business partner.  I looked up the camera policy for the American Airlines Center and was a bit dismayed when they said no professional or interchangeable-lens cameras were allowed, so I figured it would be a good time to visit my friends at Aperturent, a national rental house which has a local pickup location in Dallas.  They had an RX100 VI and I snagged it (just before Teja did, actually, he ended up shooting with a Fuji).

The RX100 VI is what I’d call “mostly pocketable” but maybe putting it in a purse or satchel would be a little easier.  Sony has the following measurements for it: 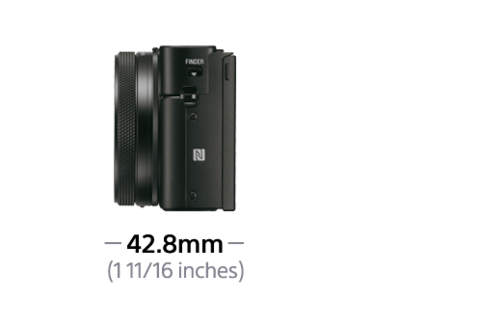 So maybe if you have bigger pockets, I dunno.  It’s easy to handhold though.  And fitting a 24-200mm equivalent lens into that form factor is impressive.

The back of the RX100 VI is dominated by the LCD screen, which can also function as an EVF.

The menus are similar to other Sony cameras, so if you like them then great!  If you’ve heard they’re not the easiest to follow you’re not entirely wrong but I’ve been used to them for years so I don’t really have any issues at this point.

Similar to the more expensive Sony cameras, you can use the on-board wifi router to transmit images and videos to your phone almost instantly for posting to social media and getting all those sweet Instagram likes.

Where did I go first?  Founders Plaza at DFW Airport of course.  I wanted to test out the zoom lens and see just how detailed things were at 200mm.  No better place for that than DFW.  Now, I’m usually out there with a comically long lens and enormous brick-like camera so this was a bit different, but I ended up happy with the images!

Now, of course I couldn’t zoom in like I can on my 100-megapixel Fuji GFX100 but these images were perfectly usable.  It was crazy to have that kind of zoom range in a point-and-shoot but I thoroughly enjoyed shooting with it.  Great capabilities here.

But the big challenge would be in a much-tougher environment…

Basketball games at the NBA level are usually very well-lit, so I wasn’t too worried about the amount of light I’d have to work with (compared to a high school game in an old gymnasium, by comparison), but autofocus and high-ISO performance would be essential, because of the shutter speeds required for photographing professional sports.

The super-fast frame rate (24 frames per second!) of the RX100 VI was a blessing and a curse, as I shot 1700 images during the game.  As we got to our seats we realized these weren’t just good seats…they were on the floor.  Teja and I were both excited to get shooting.  I brought the RX100 VI to my eye and got to business.

This one was close to us at around 24mm, as wide as the camera would go.

While this one was on the other side of the court using the RX100 VI at full zoom, 200mm equivalent.

The camera proved incredibly powerful, with instant autofocus, that I captured quite a few keepers, even while putting the camera down at times so I could just sit there and enjoy such wonderful seats.

Then it was halftime, and the halftime performer that day was a guy who did bike stunts with a Tron theme, so the bike was lit up with neon lights and he was dressed pretty crazily as well.  I decided to go for some panning shots of him to see if I could pull it off with such a small camera.

Panning shots are hit and miss for me but I think I got really close on those two!

The game went on and on and the Dallas Mavericks were trailing the Sacramento Kings nearly from the beginning but they made a comeback…only to run out of time towards the end.

Oh, and to make this more travel-related, I happened to see American CEO Doug Parker sitting in the first row (which makes sense, being at the American Airlines Center and all).

During warmups I tried using the 960fps slow motion mode and captured this (slightly blurry, no idea why) shot of one of the Sacramento Kings players warming up.

Well, let’s put it this way…I own one now.  I really loved shooting with it.  Would I have rather shot with my bigger cameras?  Sure, but the RX100 VI was just wonderful for shooting when I felt like shooting and putting it away when I didn’t without it taking up the real estate that a Sony a7rIV with 70-200 would, for example.

The video modes, shooting speed, and super slow motion are all immensely attractive to me.  I wish the VI had an external audio input but it doesn’t, oh well.  Using this as a b-camera during my travels and while I’m shooting videos on my bigger camera will be super easy, and I’m a bit more comfortable putting this camera in places I wouldn’t put my Fuji or Sony mirrorless cameras.  Sony also makes some great accessories for the RX100 line, like a handle with zoom and video controls on it for vloggers as well as an underwater case.

So, to wrap it all up: man, it’s pricey, but it just might be worth it.

Have you tried the Sony RX100 series?  Which is your favorite?  Tell me in the comments below!